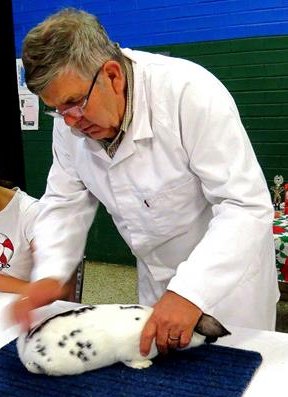 Rowland started in the fancy over seven years ago, joining CRCI, RBA of NSW and RFSNSW.

Living in Narromine in the central west of NSW Rowland has to travel a minimum of 400km to the nearest show venue. He has travelled extensively to all NSW clubs exhibiting at in excess of 20 shows a year and enjoys the camaraderie of the fancy and the competition to better stock standards.

Rowland specialises in rare breeds, starting with Dutch and soon after adding Silver Fox. From there he has added Tans, Chinchillas. Sables and Smoke Pearls. He also breeds Standard Rex in ermine and castor and has a few mini Rex in the mix as well. He has bred Thriantas for about four years, producing one buck which achieved the status of 4X Supreme Champion gaining over 105 stars on the show table. Rowland has produced multiple best of  breed winners in all the breeds he has shown. As well as having four BIS wins with Silver Fox, he has had BIS wins with Chinchillas and a Sable and twice a runner-up BIS with a Tan.

Rowland started his judging with RBA of NSW over five years ago and travelled to gain experience under the guidance of experienced judges throughout NSW. Under the tutoring of Australia’s most senior judge Mr John Porritt he progressed to probationary status in Victoria in early 2012 and was signed off by John in March 2013. He has to date officiated at a majority of NSW clubs as well as travelling to judge in Victoria and Tasmania

In early 2012 Rowland was co-founder of the Orana Rabbit Fanciers club based in Dubbo. The club was formed to cater for rabbit enthusiasts throughout the central west of NSW and now has members from Dubbo to Moree and Lithgow. It has been successful and conducts three shows a year.

Rowland is looking forward to judging in SA to see new stock and put some faces to the many names that he has encountered and heard of throughout the fancy. 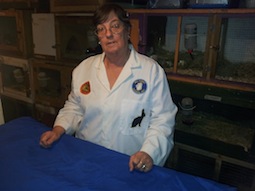 I was born and breed in Kalgoorlie, Western Australia. Move to Perth with parents at the age of 17. While working at Aherns met Michael and married several years later, and moved to Kambalda (not far from Kalgoorlie). Had our daughter Natasha two years later, moved back to Perth when she was 4 years old.

When Natasha was 17 years old she asked if we could have a cat, but Michael didn’t want one as didn’t at that time like them. After a lot of research on her part and going to a couple of shows she was allowed a rabbit. Within 3 months we all had rabbits and started breeding and showing. We were all under the Stud name of ‘Ashrose’, When Natasha moved out Michael & I applied for our own stud name ‘Dreamchaser’. He is a big part of the rabbits with me.

After several years of showing I started training to be a judge. Have been a judge now for around 5-6 years.

Have been a WARCI & HRC committee member for around 12 years.

Having the rabbits has been wonderful therapy for me as I had a mild heart attack in our first year of breeding and showing. Still have problems, plus back, arthritis. Two years ago I had an operation and almost died, and has changed my lifestyle. If I didn’t have the rabbits I think it would have taken me a lot longer to recover. Even though I have bad days, I will always feed, water and clean the rabbits and our other animals. Also very grateful to be here to see my two lovely grandsons.

This hobby has also given me wonderful friends here in WA as well as the Eastern States.

My other hobbies are Sewing, Crocheting & Cooking Cakes, Desserts & Biscuits. 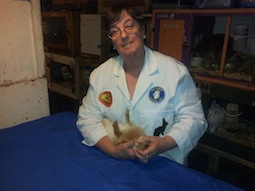 I would like to share with you all a little about myself, I have for as long as I can remember had a rabbit, as a teenager I discovered the Rabbit Fancy and began showing my pet bunnies in 1996. After a few tears I very quickly learnt how to present a show bunny with clean feet! My passion for improving the breed became obvious when a quick bunny count revealed over 120 contenders!

For the last 17yrs I have always had bunnies, although having a few years of the Fancy in between to travel & follow other interests. I have had over my time most breeds, most challenging being the English Angora & Tan. These days I now have a more conservative number of about 60 rabbits which is still on my ‘too many’ side but consists of mainly Polish, Satin, Netherland and some Dwarf Lop.

I was trained by The Victorian Rabbit Association Inc. & began my training in 2006, I then finished training in 2009 and completed a 2 year probationary which ended Feb 2011.
I have been privileged to judge many shows in my home State of Vic, most Australian states for a variety of clubs including by not limited to, REBS NSW, Rabbit Fanciers Society NSW, ACT Southern Tablelands rabbit Club, Canberra Rabbit Club & SA The South Australia Rabbit Fanciers Society. Hills rabbit club WA & RBA Tasmania for the Hobart Royal. Also New Zealand for the Canterbury Cavy & Rabbit club Assoc in 2012, and the Northern Nationals in Auckland 2013. I have also had the privilege of book stewarding for some of our International UK and American Judges.

My Stud name is Rigby Rabbits & I have strived to produce and present my bunnies the best I can over my time while achieving some very rewarding results, most recently winning the 2013 Royal Sydney Easter show and the Rabbit Breeders of Vic 5* Show.

Paul became interested in rabbits at an early age, when he was introduced to his first pet rabbit by his father in the 1980’s. In 1988 he joined the newly formed Breeders Association of NSW Inc (RBANSWInc.), and attended the very first rabbit show in NSW. At this point his interest in rabbits was consolidated and he started breeding and showing pedigree rabbits. Initially he started out with Netherland Dwarf and soon diversified into Dwarf lops, Rex and Satin, along with the first reconstruction of the Thrianta from the imported Thrianta and Deilenaar, and the German Angora. In 1990 he began judges training with the RBANSWInc, where he completed his training under John Porritt and Warren Shearman, and in 1996 started regularly judging for a variety of clubs.

Paul maintains a strong interest in genetics which he studied at UNSW. His interest in genetics stems from his early enthusiasm for science along with his interest in rabbits, breeding systems and in particular melanin biology and pigmentation. During the early days of involvement with the RBANSWInc he was given a publication written by Flo Ann Gordon, “Coat Colour Genetics of the Netherland Dwarf” from Angela Elliott one of the founding members of the RBANSWInc. This was instrumental in a series of events that directed him to his career choice in genetics.

Paul now breeds Dwarf lop, Satin and Tans and is currently working on local breed resurrection of English Spot and Thrianta as well as the improvement and colour diversification within these breeds.

TO THANK OUR SPONSERS FOR

THEIR KIND DONATIONS AND

SUPPORT TO OUR CLUB